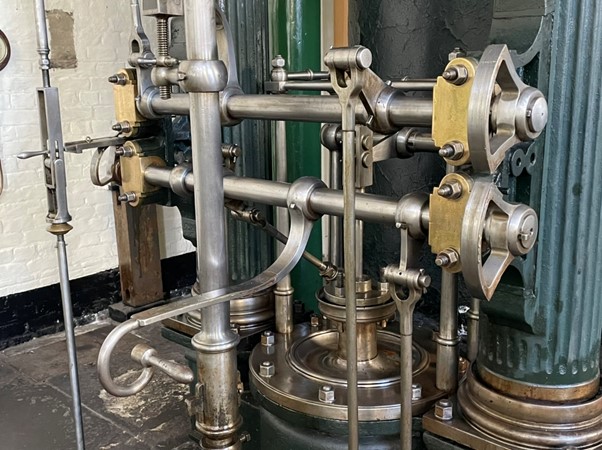 Congratulations to Century Millwrights and our volunteers who, between them, have completed the planned work to the Boulton and Watt, and brought the engine into a presentable state to be steamed at our Autumn Steam Up on Saturday 9 and Sunday 10 October.

As anticipated the repairs to the beam truss proved to be straightforward. The wedges securing the truss were removed, cleaned and dressed, and reinserted. Once we had a proper clock gauge in place (the first one we used turned out to be inaccurate) no movement could be detected in the truss, and the loud sound it was making while the engine operated disappeared. We were able to confirm at the same time that there was no movement in the nose pin on the beam. And we also identified, and fixed, a problem with the lubrication of the drop links at the inboard end of the beam.

Test running was carried out and the engine was signed off as operational by our insurance company’s inspecting engineer. The engine then received a thorough clean to make it presentable for public viewing. Further cleaning work is still taking place, but it already looks a lot better! The extent of the cleaning needed was revealed when we discovered brightwork at beam floor level which had been so covered in baked on oil that we had always assumed that it was painted black.

We are continuing to explore more effective ways of cleaning and of protecting engines from dirt and corrosion. This sort of work has been going on for a long time but new products are continually being developed and some recent ones look very promising.

Thanks to a donor’s generosity we are proceeding with the full repair of the working beam engine model which stood in the Boulton and Watt House for a number of years. Some small improvements will also be carried out to ensure a longer working life in the future. It is unlikely to be ready for October but we hope to have it back in place by Christmas together with the associated interpretation.

Now the planned works are complete, we are reviewing the budget to see what else we may be able to squeeze out from the existing funding. The highest priority job remaining is the reinstatement of the insulation on the Boulton and Watt valve chest and steam line. As the picture shows, all the lagging has gone from the valve chest as well as most of the steam line. This was removed many years ago as part of a full programme of asbestos clearance. The lagging on the valve chest is particularly important to the historic appearance of the engine as it was never cleaded; the surface was just moulded and painted. You can also see this on the cylinder of the Boulton and Watt which retains some of its original cow dung-based lagging. The survival of this sort of lagging is very rare; replacing it would be a major step in restoring the historic appearance of the Boulton and Watt.

Looking ahead we will need to continue to maintain the Boulton and Watt in a safe operating condition. We will soon need to repack the timber on the air pump piston ring, a job that needs doing every decade or so. Since this will necessitate stopping the engine, we will also take a closer look at the bearings on the drop links to see if they need any further work.

We are also costing the replacement of some flooring round the Boulton and Watt pump. This was all removed by the Metropolitan Water Board, along with the East Boulton and Watt Engine, when they started converting Kew Bridge to a museum station. This has permanently reduced access both for visitors and for engine maintenance. We secured a large number of heavy duty floor plates from Lots Road Power Station about twenty years ago and we are looking at what works would be needed to reinstate some of the missing flooring without blocking interesting views of the pump well.

We will report further progress on the beam engine model and any other works to the Boulton and Watt. In the meantime we should and must thank the generous donors who made this important work possible; Century Millwrights who have carried out an exemplary job on behalf of the Museum, our staff who have facilitated the work and our volunteers who have done a great deal behind the scenes to prepare the engine itself and to facilitate its operation in difficult circumstances, and have done so without neglecting the need to keep as many as possible of our other engines in running order.

We need to do some necessary works to the triple expansion and Waddon engines to bring them back fully into steam, and also to complete some long outstanding pipe lagging in the Steam Hall. Then we hope it will be onward to the Maudslay and the 90 inch!