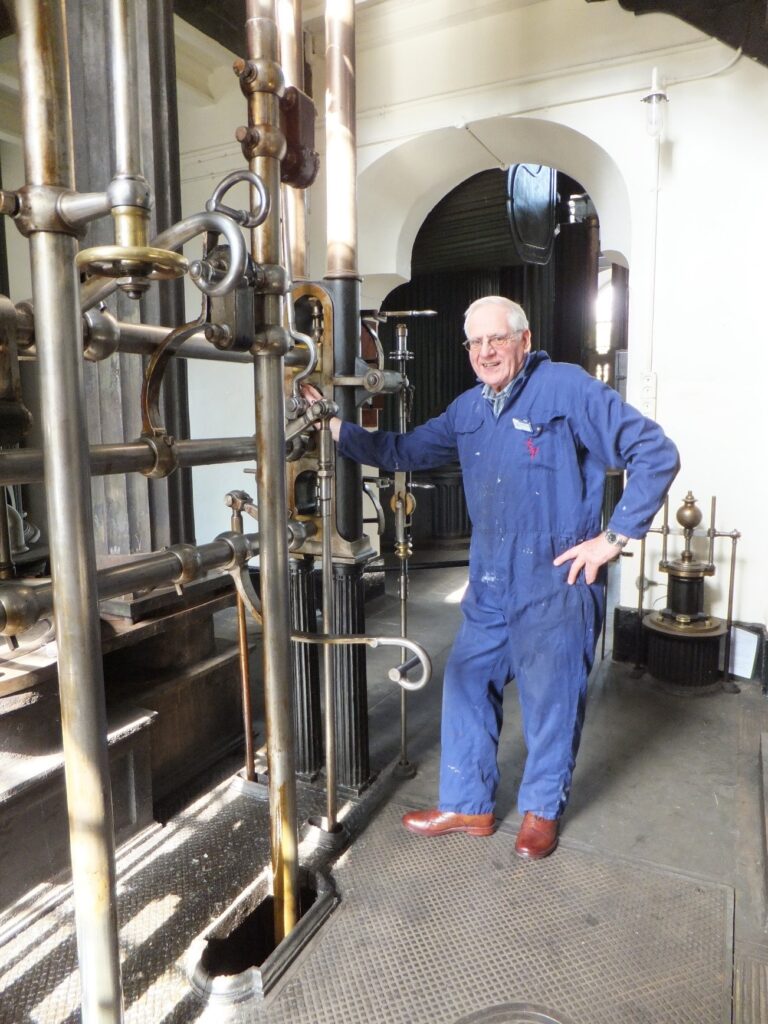 John Porter, volunteer at and former trustee of the London Museum of Water & Steam, died on 30 September 2021.

John Porter had an early introduction to historic steam. Many people still remember travelling on steam hauled trains; only John could claim with justification that he had done so behind all of Gresley’s great P2 class locomotives (before they were butchered by Thompson) and over the Forth Bridge too. His working life included serving time in a tanker engine room and subsequent involvement with the last steam propelled turbine tankers, acceptance tests for new and recommissioning of second hand ships, and engineering consultancy work, including surveys of SS Robin and the Cutty Sark.

So when he first visited the Museum shortly after its opening in 1975 he was already enthusiastic about steam and about large machinery; and as he said himself he was immediately hooked by the offer to learn to drive the Boulton and Watt engine. Family and work meant that he was not regularly involved as a volunteer until the early 1980’s, but then he became a frequent Cornish engine driver. He always stood out; not just because of his height but also his commanding presence and wide knowledge, which he was always willing to share with visitors and colleagues. At one extreme he was willing to put on his old merchant navy uniform for one of the Museum’s historic weekends; at the other he was entirely at home advising in Japan on the merits of triple expansion engines, directing the resurrection of a steam driven sugar cane mill in the West Indies, or discussing land drainage with Dutch water engineers. He was seen very much as the Museum’s international representative and he was a very striking and impressive one.

As a trustee he was always clear about the significance of the Cornish engines and other machinery and the need to ensure that their historic importance was respected, and that they were not sidelined as the Museum developed and inevitably moved towards developing wider and more diverse audiences. He encouraged a more rigorous approach towards the understanding and recording of the engines themselves, a significant part of the work needed to retain and enhance the Museum’s official accreditation. He also played an important part in developing relations with members and potential donors.

John was always physically active – a characteristic which he shared with his wife Margaret. John always did his share of routine maintenance and work on the engines, but on top of this (though under Margaret’s guidance) John and she brought the Museum’s large garden area into decent order. Margaret then enhanced it with landscaping and planting but John’s enthusiasm waned somewhat after he broke his ankle in a fall and had to be carried off in a stretcher. He spent a lot more time with the engines after that.

All this would seem like enough for one man. But perhaps most importantly John committed increasing amount of time to the study of the history of the Museum and of water supply in London. He was for many years an active member of and participant in the work of the Newcomen Society and was preparing a book on the Grand Junction Water Works Company, the Kew Bridge Engines Trust, and the use of the Cornish cycle engine in pumped water supply. Arrangements are being made to complete and publish this work as a memorial to John as well as an important piece of historical research in its own right.       .

The Museum and the wider heritage world have lost a friend, a colleague, an expert and a real enthusiast. John is survived by his wife Margaret, his daughters Jane and Alison, and the grandchildren.