On Tuesday 29th January, 1918, the Kaiser’s air force launched an attack on London. Four aircraft were detailed for the raid but, although they had been built by the Zeppelein Company they were not airships. They were, in fact four of the biggest design for a piston-engined bomber ever made (apart from the B29 Superfortress). Each had four engines and a wingspan of 138.5 feet. This was greater than the Avro Lancaster (102 feet) and the B17 Flying Fortress (104 feet) and compares with the 95 feet of the Boeing 737-400 jet airliner (only 95 feet). Introduced in 1917, eighteen were built, of which eleven were destroyed, only one by enemy action, the rest in accidents.

On that Tuesday night in January 1918, four of these ‘Staaken R’ planes, known as ‘Gigants’ (‘Giants’), were detailed to bomb London. One suffered engine failure shortly after take-off and another (R26) turned back over Essex, also with engine problems. Of the other two both were attacked by British fighters. R25 bombed North-East London and turned home over Tottenham. R39 found itself over Hertford. It turned south and turned again over Richmond to fly westward, then via Isleworth to Brentford. There its bombs hit a house in Whitestile Road, killing, among others, Mrs May Kerley and five of her children. Her husband, a sergeant, was serving on the battlefields of mainland Europe.

R39 flew on, dropping bombs on the Metropolitan Water Board (MWB)’s Kew Bridge Works. One bomb damaged No.8 slow sand filter bed, a second flattened the gatehouse building and the third the smithy and fitting shop (see photograph above, from February 2018). At Kew Bridge railway station, a fourth bomb broke a trunk main, which flooded the tracks through the station. Part of the waterworks’ gatehouse building formed offices for the Foremen.

Both the Engine Foreman, Mr William Finch and the District Foreman, Mr George Bently were killed in the raid and their names appear in the list of ‘These our Brothers’ honoured at the Memorial Service at Southwark Cathedral on 23rd November 1918. Fortunately none of the vital machinery had been damaged and the senior engine driver, Ernest Gluyas, the son of a driver from Cornwall, took command.  He ensured that the engines were kept going and the water supply was not interrupted. He was later awarded the Order of the British Empire and promoted to Station Foreman in recognition of his coolness and courage during the raid.

The damage to the waterworks was repaired after the end of the war. The southern end of the workshops were rebuilt to the slightly different design which can be seen today, and at the same time a laboratory was added to the Gatehouse.

On the front face of the gatehouse at the time of the bombing was a clock, in the end gable, protected by a small porch of its own. The porch, the clock, indeed the whole gable were destroyed. An employee, Mr. R.G. Remish was allowed to salvage as much of the clock as he could find. This he did, fashioned new parts to replace those missing, and made a case for it. When he died his daughter gave it back to the MWB which put it into its Museum at Kew Bridge. It now keeps time on the wall of the Museum’s café, a fitting memorial to William Finch and George Bently, who though not military men, still gave their lives in the service of ‘Water London’.

Many thanks to Bryce Caller, Alyx Jenkins and Ron Howes, for contributing their research and expertise to this history. 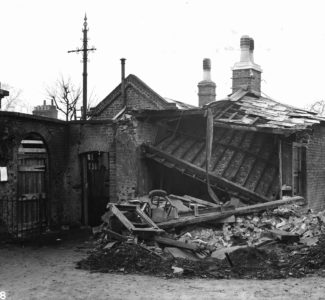