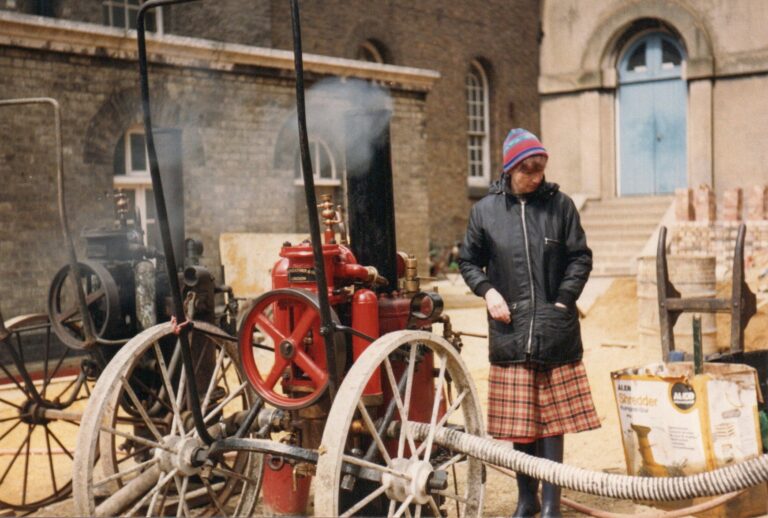 Betty White, seen here at an early fire engine show alongside two Merryweather portable pumps in what is now part of the Splashzone, was a long-term volunteer at the Museum. Kew News No. 7 for June 1978 records her start as a volunteer with other members of the White family. She was well known to and popular with visitors as well as the older generation of volunteers. Initially she was involved mainly in visitor facing operations, staffing the Museum front desk and shop, where she was a friendly and welcoming face for the Museum. As time went by she branched out into event management, working with Ron Plaster on the Model Show and subsequently the Meccano Show.

Her accounts of these events in Kew News are fascinating both for the people and exhibits she describes but also for the visitor numbers we attracted. The weekend of the Models Show in October 1992 attracted “only” just over 1,000 visitors, 200 down on the previous year. Traction engines and steam rollers were present and Wendy, a Bagnall locomotive, was operating on our narrow gauge railway. The following year visitors for the show were 35% up and were able to see ten traction engines and rollers outdoors and many working steam models inside. A rally on this scale in the cramped confines of the Museum is no easy task but Betty took it all very much in her stride. The Meccano shows she organised were soon attracting 1,000 visitors a day as well as publicity in national newspapers and on radio and television.

Sadly because of ill-health Betty was unable to continue as a volunteer and her death this year came after a long period of decline. She will be remembered affectionately by all those at the Museum who knew her, some of whom represented the Museum at her funeral.