And therein lies our problem: what’s the point of having so many books about engines, photographs of engines and biographies of Isambard Kingdom Brunel if they’re stuck in the basement? I’ve blown enough dust off boiler servicing manuals to know that an archive’s most useful when it’s being used. The museum sits atop a glittering hoard of industrial history, like an engine-enthusiast dragon. All it needs, really, is for people to know it’s down here, so they can come and read it.

That, ladies and gentlemen, is where we archivists come in. Our hope is that the shelves and shelves of books nestled in beside the computer servers, cardboard boxes and bubble wrap can be turned into a proper library, to be readable to anyone needing to know how to service their boiler. It’s quite an ask – for a start, they’d need to be put somewhere more accessible than an underground chamber beneath the café, behind a locked vault door – but in the meantime, we’re rebuilding the filing system so that it’s more accessible, making sections for local history books, books about sewage, books about Christopher Wren architecture (I don’t know why we have so many, but we do) and so on.

We’re also digitising the museum’s collection of photographs; heaven forbid that a fire should torch the lot, but we’re most of the way through scanning them, so that our many pictures from the insides of pumping stations are computer-accessible and safe from – shudder – sticky fingers.

Most of that’s still blue sky thinking. There’s plenty of hurdles, large and small, between us and what we’d like the basement to be. Computers have crashed; printers have malfunctioned; that book we were gonna take another look at has been put down somewhere and forgotten about. (Often by me.) But in the meantime, item by item, we’re blowing plenty of dust off the shelves.

Finn McQueen is an Archives Assistant at the London Museum of Water & Steam. 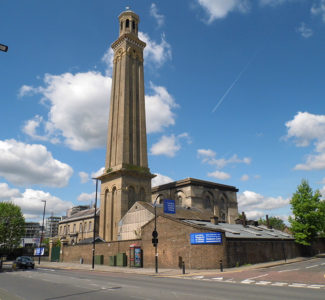