Among the research collections taken into the Museum archives is that of Geoff Saul, which I have been cataloguing in more detail following initial work by John Porter. Geoff clearly had a number of opportunities to acquire original documents which sometimes throw unexpected light on lesser known aspects of London’s water supply.

The New River Estate was built in the nineteenth century on land surrounding the New River Company’s Islington terminus, New River Head, where the River proper ended and a series of water mains began. However in the eighteenth century this land formed one of the larger industrial complexes in the country, the New River Company’s pipe yard. Urban water supply is often defined in terms of visible structures such as reservoirs and pumping stations; but in most cases the biggest investment in time and money is the network of water pipes which distributes water to customers, and which in the case of the New River Company alone covered hundreds of miles of streets. Before the widespread adoption of cast iron pipes in the early nineteenth century these water pipes were made of elm with about a twenty year life span, and a huge amount of work was involved in boring, preparing, and laying new pipes, as well as replacing those which were life expired, all of which for the New River Company was managed and carried out from the Islington Pipe Yard.

So it was fascinating to discover, in the Saul collection, hand written job descriptions for the role of Foreman of the Islington Pipe Yard, dated 1768 and 1770. The texts transcripts are as follows.

Joseph Hurlock to be Foreman of the Yard

Whose Business shall be

To sort all the new Timber.

To mark the Timber into what Lengths it is to be cutt.

To appropriate the Timber for the several Sizes of the Bores.

To order all the Workmen of the Yard how they are to do their Business.

To work at his Leisure Time – not employd in the said Purposes at the Cockmaking Shed.

To take care that there be a sufficient Quantity of Pipes of all Sizes bored.

To lay aside in a Place on Purpose all the new Timber deemed fit for Sale.

To sort all old Pipes which are to be used again from those to be sold.

23 June 1768} Ordered – that Joseph Hurlock be appointed Foreman of the Yard according to the manner prescribed in Mr Mylnes Report, and that his present Weekly Wages be continued with the addition of two Pound [each?] Quarter from Midsummer 1768. 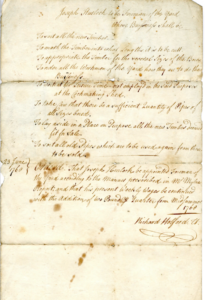 The Orders of General Court of June 1768 relating to the Duty of the management of the Pipe Yard in Mr Bulls department as Foreman of the Yard, and Joseph Hurlock’s Duty was this day discharged and John Duffields Petition was read and he is this day chose Foreman of the Yard in the place of Mr Bull with the Establishment hereunder mentioned

To sort all the new timber

To appropriate the timber for the several sizes of the Bore

To Pay the Workmen of the yard the Supervisors and their respective men and enter the Bills thereof in a Book and to report to the meeting of the Company any Errors and Improprieties therein.

To be the sole director of the Trucks their time of going out and Coming in and check the time deficient.

To keep the Yard Book of pipes &c

To attend the working hours of the yard

Ordered that Joseph Hurlock be Cock Maker to the yard and to Continue at that Business. 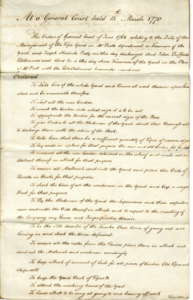 It looks as though Joseph Hurlock only lasted in the job a couple of years (or was he too valuable as a cock maker – that is a maker of water valves?) but the job description for his successor, John Duffield, is much fuller and clearer particularly about his management responsibilities (and is the reference to taking “the advice of the Clerk” when discharging workmen an early example of the involvement of a “human resources” department?). These documents have a modern ring to them.

And what sort of job was this? It had major responsibilities for a key area of the New River Company’s activities; it was also for the time very well paid. Direct comparisons with modern prices are notoriously difficult but this would certainly have been in the £50K+ section of a current day jobs website.

One of the great things about working for a Museum is that you have the most interesting place of work in the world. Every time you step away from your desk you are in a Museum, it is a lucky…

It was with a heavy heart that we took the decision to close the Museum on Wednesday 18th March 2020, with the last day open to the public on Sunday 15th. We had already seen fewer visitors coming that weekend,…