The 100 inch engine is the largest surviving single cylinder beam engine in the world. Built by Harvey & Co of Hayle in 1869, it first pumped water in 1871.

It was one of only six engines of this size built in Cornwall, five of them being built by Harvey & Co. At one time 70% of London’s water was pumped by Harvey engines and the company maintained an office at Nine Elms. When running the engine was synchronised with the 90 inch engine so they stroked alternately.

The engine was in use until the 1940s at which time it was put on stand-by and run occasionally until 1958, when the chimney stack became unsafe and was demolished and the boilers were decommissioned.

The engine ran for most of its working life with a cracked beam and the crack and its repair can still be seen today. 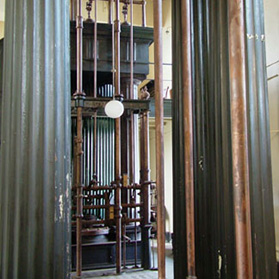